The History of Brady's Pond... thru the Years 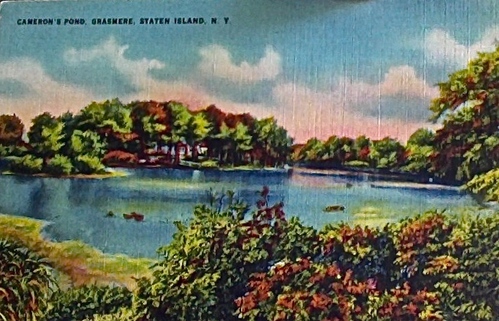 Situated in the Grasmere area of Staten Island,
Brady's Pond is a  spring fed,15 acre wetland pond that has been the source of  community enjoyment, economic return and  environmental support for the people of Staten Island.
Brady's  Pond exists  along side  the  smaller Cameron Lake which is located across West Fingerboard Road.

Called the Haunted Swamp at one time because a murder had supposedly occurred on it's shores.

During the 1800's, the property that Brady's Pond lies on was part of the  large Sir Roderick Cameron Estate. Supposedly named after a friend of Sir Roderick, the lake and it's environs were   used for fishing and   hunting for pheasant.

Cameron sold the  lake to his friend Philip Brady.
Brady closed off part of the "Haunted Swamp" with a weir,blocking the flow of water and forming what is now Brady's Pond.
Brady established an ice business  on the lake.
The fresh clean waters of Brady's Pond provided the community with ice. Ice harvested from Brady's Pond was pure and clean and used thruout the island. Ice tongs and picks have been retrieved from the waters of the pond  giving a glimpse of it's past.
Always a magnet for ice skating in winter, Brady's Pond had some tragic deaths from people falling thru thin ice and drowning.. Even though Brady would warn children and  visitors alike of thin ice, his warnings fell on deaf ears .  Philip Brady  was either spooked by these tragic deaths or just  wanted to retire  so he sold his land in 1909 to Heinrich Christ William Feith.
BUT THE POND IN GRASMERE WILL FOREVER BEAR  HIS NAME>>>>BRADY"S POND.
In 1911 part of  Christ's land was sold to Charles D. Durkee, who owned a marine hardware firm. On this site Durkee  built a brick factory and a large mansion called Durkee Manor.  Durkee sold parts of the estate off to developers and the neighborhood  as we know it started to take shape. 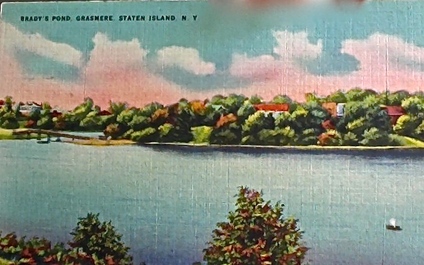 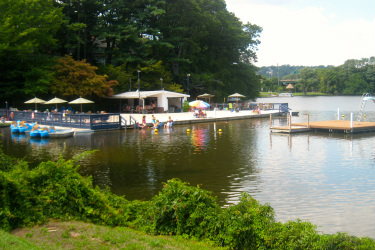 After Charles Durkee passed away, in October 1930,
Brady's Pond became the  home of the Cameron Club. Started initially as a social club and  swim club located on the shores of  Brady's Pond. It boasted a sand beach, swimming dock and rowboats for it's members. Membership at that time was open to  those families who lived in the footprint of the old Roderick Cameron Estate.

Later on the Cameron Club  was able to purchase the lake from the city and still owns the waters of Brady's Pond to this day. The group operates a swim club during the summer months. Membership is now open to anyone who lives on Staten Island. 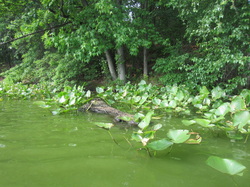 In the early 1960's  with the building of the Verrazano-Narrows Bridge the idyllic perimeter of Brady's Pond was shake. Part of the lake was taken by the City of New York  to accomodate the construction of the Staten Island Expressway and it's auxiliary roads. A section of the lake along the northern border was annexed by the city and filled in to form the highway that leads to the Verrazano.
Progress trumped nature... a dirt,  debris, barbed wire, machinery and all sorts of construction debris  was dumped into Brady's Pond.

This was a dark time for Brady's Pond. 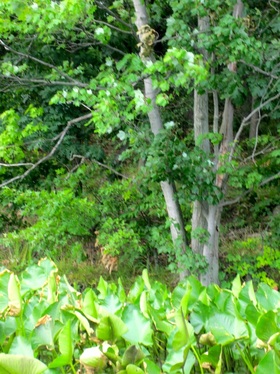 But  with time and the work of the Cameron Club the water was coaxed back to normal.The natural springs continued to feed the lake with fresh clean water .
But it could not be left to nature to keep this body of water "natural".

Brady's Pond  managed to endure the late 20th century...dodging "environmental" bullets like *increasing storm water drainage from DEP  pipes ,
*drain off from the streets and the Staten Island Expressway which  carried gasoline residue and  dirt from local streets,
*dumping of tires and garbage along Narrows Road South into the lake
*increased construction of larger homes and with them larger lawns and gardens with their fertilizers,
*increased mosquito populations causing  increased fear of exposure to   West Nile and Zika Viruses ,
*the influx of Canada geese and the natural aging of the lake.
*the build up of organic matter... leaves  from trees, aquatic weeds and algae etc.

Brady's Pond survived thru the efforts of the Cameron Club. Without them, this small treasure would most likely have become a  swampy bog.Potentially becoming a breeding ground  for mosquitos, vermin  of all kinds.
But survive it did. 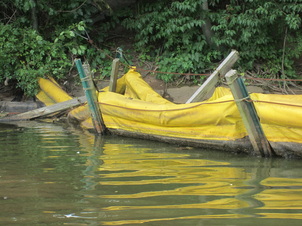 and
A new century brings new problems...
As we greeted 2000, we vowed to keep up the work that had served us so well in the previous years.
In 2010 a new issue arose, the Staten Island Expressway which is the northernmost border of Brady's Pond was scheduled to undergo massive redesign and renovation. Adjacent streets were re-constructed , re-vamped and re-directed.

During these past years of construction large amounts of debris,  silt and water  were released into the pond.in essence, a kind of construction pollution.  Silt and dirt in the run off from the highway  accumulated .

Local residents responded with anger and confronted the DOT. The DOT was responsive to their concerns.
Working with the Department of Transportation (DOT)  efforts were made to insure that drainoff from this busy highway into Brady's would  be filtered in some way.
Construction is currently completed and the DOT has included leech fields that filter and clean up water as well as separators (Vortech chamber) to separate waste from the highway drainoff.
Brady's Pond there existed an area of   silt build up left over from  the construction site that effectively filled in part of the lake at the runoff point from the Staten Island Expressway... near Steuben Street and Narrows Road South.
As of October 2016,  DOT and their environmental  engineers  acknowledged their responsibility to clean up the  north east corner of Brady's Pond...where yellow water retention baffles remained from  the previous years construction. and large silt deposits exist.

Clean up by the Department of Transportation ... August 2017

Thru the efforts of the Grasmere and Cameron Lakes Bluebelt Conservancy,  the DOT fulfilled their responsibility and  cleaned  up the silt and debris from the Staten Island Expressway  construction.

The Department of Transportation (DOT)came  to clean up the stormwater drain area near the Staten Island Expressway in mid August 2017. A crew of engineers and workmen  were on site for over a week working in Brady's Pond.

An new dam was created with sand bags and plastic sheeting in the lake  beyond the  original  yellow floating baffles. Mud Suckers pumped the water from the interior dam area back into the lake. When the water was low enough mud and silt was  directed by hand into large  flexible suction tubes that lead to a heavy duty  vacuum truck  situated high above the lake on Narrows Road South .Because the area was inaccessible  to machines, this was a job that  was done entirely  by hand.Shovel by shovel the silt, leaves and debris were shoveled into the suction tubes of  the vacuum  truck and carted away by DOT. They lake and shoreline was cleaned . The telephone pole that had been floating in the lake for over   5 years was removed. The temporary dam was removed  and taken away.The DOT Clean up was completed.


A victory for Brady's Pond...
Man would have to give nature  some help.
The Cameron Club   takes it's  responsibility as protector of Brady's Pond very seriously.  It  has  been involved in a decades long program of water maintenance by  both mechanical  and chemical means. Guided by professionals in the field, the health of the lake is  monitored  regularly and treated when necessary.
With the guiding had of the Department of Conservation ( DEC)  always directing the efforts, Brady's Pond fights to remain clean and usable both for nature and man.
Local Officials like NYC Councilman Steven Matteo have generously helped us with NY City Council Discretionary Grants​ and Parks Equity Grants that have been used to defer the costs of treating the lake for algae . Funds have been used to replace and repair the existing older aeration system. We are so grateful for the help that we have  gotten so far.

So that's where we are today.
Fighting to keep the waters of Brady's Pond clean for  the next   generation.

YOUR DONATIONS  are our way to insuring the future of Brady's Pond.